Participation to the entirety of both sessions is compulsory. 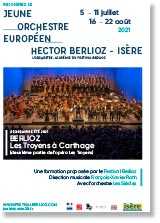 Target audiences
Students of Pôles Supérieurs and CNSMDs (Paris and Lyon), students of major European conservatories, CRR and CRD’s students, at the end of 3rd or 4th cycle.

The Hector Berlioz European Youth Orchestra – Isère thanks the Isère Department for its support.

With the support of the Caisse des Dépôts Group, main sponsor of the youth orchestra

The Hector Berlioz European Youth Orchestra – Isère (or JOEHB-Isère, pronounced « job », acronym based on the french designation), offers exceptional training for young students from the best conservatories in Europe, who wish to deepen their interpretation of the romantic repertoire, on period instruments.
Starting from 2009, the Berlioz Festival, led by the Agence Iséroise de Diffusion Artistique (AIDA) and its director Bruno Messina, wanted to provide a unique orchestral training course in Europe. As a real orchestra-academy, the youth orchestra’s goal is to encourage the professional insertion of young students from Music Conservatories, poles of Higher Artistic Education and high-level European music schools.
For 10 years, the orchestral academy of Berlioz Festival has been directed by François-Xavier Roth, an internationally renowned conductor specializing in interpretation on period instruments.
The summer internship is organized in two stages: in July at the CRR in Paris and in August at La Côte-Saint-André (Isère). Students benefit from an exceptional training with experimented musicians from Les Siècles orchestra, which participates to their professional integration.

IN 2021
After the success of Roméo et Juliette, La Damnation de Faust, Te Deum, La Grande Messe des Morts (Requiem) and the commemoration of the 150th anniversary of Hector Berlioz’s death with a performance in La Côte-Saint-André of La Prise de Troie, the first part of the opera Les Troyens, in 2021, the Hector Berlioz European Youth Orchestra – Isère will interpret Les Troyens à Carthage, the second part of this opera.

RECRUITMENT
Recruitment is done on file, enclosing a CV, a cover letter, the application form, and a video of imposed orchestral lines according to sections.

The application procedures are specified on this website when the call for applications is open.

ORGANIZATION
Born out of the initiative of Bruno Messina, the Agence Iséroise de Diffusion Artistique (AIDA) / Berlioz Festival’s director, and developed with the help of François-Xavier Roth, conductor of the Les Siècles orchestra, the Hector Berlioz European Youth Orchestra – Isère is the academy-orchestra of Berlioz Festival. It is supported by AIDA and benefits from the support of the Isère Department and the Caisse des Dépôts Group, its main sponsor.

This website uses cookies to improve your experience while you navigate through the website. Out of these, the cookies that are categorized as necessary are stored on your browser as they are essential for the working of basic functionalities of the website. We also use third-party cookies that help us analyze and understand how you use this website. These cookies will be stored in your browser only with your consent. You also have the option to opt-out of these cookies. But opting out of some of these cookies may affect your browsing experience.
Necessary Toujours activé

Performance cookies are used to understand and analyze the key performance indexes of the website which helps in delivering a better user experience for the visitors.

Analytical cookies are used to understand how visitors interact with the website. These cookies help provide information on metrics the number of visitors, bounce rate, traffic source, etc.

Advertisement cookies are used to provide visitors with relevant ads and marketing campaigns. These cookies track visitors across websites and collect information to provide customized ads.

Other uncategorized cookies are those that are being analyzed and have not been classified into a category as yet.